Kannon E. Graves is a grandson to Kathleen Graham-Gandy. He lives with his parents and sister in southern Middle Tennessee where he is a sixth grader. Kannon loves history…in fact, his fifth grade history teacher often let Kannon explain historical events, especially for World War I and World War II. He loves to play football and basketball, both sports he has played since second grade. When Kannon asked his Mewaw to write a book with him about WWI, she readily agreed

Kathleen Graham-Gandy is a retired banker who has always had the desire to write.  Her writing experiences include training manuals for loan officers, and as a journalist for a local newspaper.  She is a volunteer in civic organizations and her community. She loves going into local schools to share with students about history in her local area.  Graham-Gandy is the author of three books:  “Mount Pleasant’s 100 South Main Street,”  “One Man’s Vision…One County’s Reward (How the life of James H. Stribling Affected His Fellow Man)", and “Shock Therapy! (Building a Power Line with a Blonde Groundman)". She and her husband, Charles, make their home in Middle Tennessee.

A Brief Glance at The Christmas Miracle of 1914

Sam loved history. One of his favorite pastimes was to watch the History Channel, especially regarding the two World Wars. He was fascinated about the Christmas Truce of 1914. When he heard an elderly gentleman tell the story of his dad who fought in World War I, Sam listened with enthusiasm.

Leon was Sam's best friend. Leon didn't care too much about history, but he lived and breathed basketball. Sam and Leon agreed to participate in a summer play about WWI. What happened next found them in a historical transformation that was beyond their comprehension. Could this alter past historical events? What historical event did they witness that forced them to form a pact of secrecy?

This paperback book, written by Kathleen Graham-Gandy, is a historical World War II (WWII) documentary that reveals letters found in a Corn Flakes cereal box that were written from German POWs to a Lawrence County, Tennessee, family after WWII ended. These letters are referenced in 2015 national news articles by ABC, NBC, USA Today, Chicago Sun Times and many other news broadcasting world-wide.

A Brief Glance at One Man’s Vision...One County’s Reward

James H. Stribling left his hometown to go to Texas to make his fortune.  He returned home three years later with his fortune and a wife.  Stribling used his wealth to buy land, build a bank, a high school, an orphanage, and a church.  He used his connections to build a Civilian Conservation Corps (CCC) camp on Pine Bluff.  After the start of World War II, the CCC camp closed and most of the men joined the armed forces.  While many of our soldiers were held captive in prisoner-of-war camps abroad, a decision was made to transport captured Germans and Italian soldiers to the United States as prisoners-of-war.  Mr. Stribling turned the former CCC camp into a German
POW camp in Lawrenceburg.

Discover how the Stribling family used several of the POWs on their farm and became friends with those POWs.  Delve into Ray Morris’ story of how he joined the CCC and left home, traveling to Oregon where he planted trees, built roads, and fire towers.  Read how the CCC changed his life.

Meet J. W. Krick who joined the army as a young man, became a prisoner-of-war on German soil, and later came home to Lawrence County where he was a guard at the local German POW camp.

Learn how Jim Lois Stribling Brock was her father’s daughter who also had a flair for business.  She, too, became close to the POWs who worked on the family farm. Read some of the letters that the former POWs sent asking for simple things needed for daily survival in their ravished homelands .

Shock Therapy! Building a Power Line with a BLONDE Groundman

Charley’s life-long dream was to build his own cross-country power line, and cabin. The question is: Was it Kathy’s dream, too? It sounds simple, doesn't it?  Build a power line and a cabin.  Kathy’s journals, kept during this adventure, depict the numerous activities that detracted from this dream, but yet, were all memorable moments shared with family and friends.

Read this humorous tale of the mishaps, and the joys, that this couple faced when they tackled the challenges that awaited them in the woods on Charley’s home place. This book will be a great complement to the more than 5000 Lineman prints (Lineman – The Highest Profession) that they have distributed across North and South America.

Treat yourself to this book that will have you rolling with laughter as you experience the trials of this couple. 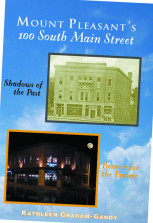 A Brief Glance at 100 South Main Street
From its humble beginnings to the small-town equivalent of California’s gold rush, phosphate has been at the very heart of Mount Pleasant’s history. In the late 1800s and early 1900s, the town became known worldwide as the number-one source of the highest grade of the ore. Once phosphate was discovered, the growth and the prosperity of the town and surrounding areas was rapid and dynamic.

The signs mentioned in the Preface and scattered throughout the book as sidebars tell a story of their own. From the Gerst ale that was distributed locally eventually emerged the Gerst Haus that became a favorite Nashville landmark. At least one of the businesses shown in the signs is still operating today in the same location where it has been for the past century.

The Town Hall located in the 100 South Main Street building has showcased many of Nashville’s country music stars, sometimes before they were known outside the area of Mount Pleasant.

The favorite chapter of the book seems to be Chapter 4, “The Many Occupants of 100 South Main Street.” Everyone wanes nostalgic when talking about the banks, drugstores, and soda shops that once occupied the building. It takes one back to yesteryear when life was much less complicated.

All of  these products are available for sale.

Call today as supplies are limited.  When they are gone they will no longer be availale.

These products are great for: Retirement, Topping Out, Memorial Gifts, Board Gifts, Storm Contractors and so much more.

Check out our "Lineman: The Highest Profession" products.